According to our latest findings*, the assumption that white vans are just for tradespeople or part-time hobbyists are misguided.

In fact, when the UK’s workforce goes off duty, many of them choose to get behind the wheel of a van and, more interestingly, there are some clear links between van brands and what their drivers do for their day job.

The Ford Transit has been a long-standing favourite amongst van drivers; a third of quotes we processed last year were for this reliable workhorse, but there are certain professionals that favour some vans over others.

The trusty Transporter was an equally popular choice for both the nation’s police officers and paramedics. The Transporter generated 37 per cent of quotes on behalf of the girls and boys in blue, compared with 19 per cent for the Ford Transit, while the UK’s medical emergency responders generated 39 per cent and 23 per cent respectively. 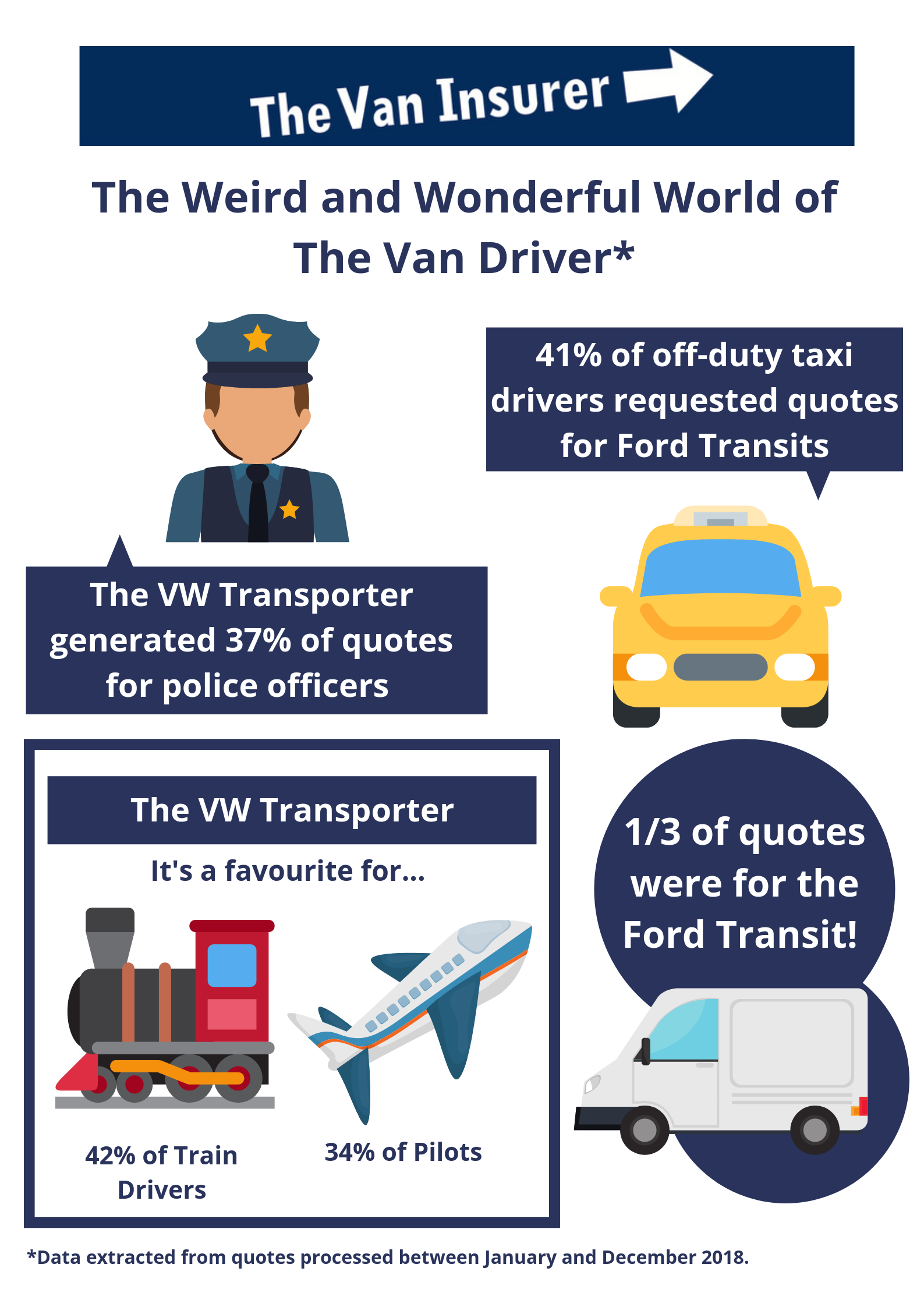 There were also some interesting trends amongst our planes, trains and automobiles professionals who keep the wheels of the transport industry turning. While 41 per cent of off-duty taxi drivers requested quotes for the Ford Transit, the Renault Trafic and Vauxhall Vivaro came in joint second spots.

Train drivers and pilots also showed some favouritism towards the Volkswagen Transporter, with 42 per cent and 34 per cent requesting quotes respectively, compared to 25 per cent and 27 per cent for the Ford Transit. Meanwhile, skippers showed a leaning towards the Ford Transit Connect and Vauxhall Vivaro, in addition to the Transit, with each generating an equal 33 per cent of the quotes.

Don’t forget, we’re able to offer competitive quotes for every customer, regardless of their occupation, however weird and wonderful. We’ve provided bespoke quotes for a wide range of van owners, from Mercedes-Benz Sprinter-driving chicken chasers and Transit-driving showmen to a falconer with a Berlingo and a DJ with a Transit Custom.

Geoffrey Bibby at The Van Insurer says: “We love analysing our data to see what it tells us about our customers. We’re proud of our ability to help van drivers, regardless of where they are in the UK and whatever they do with their van, to find the best quote to suit their needs.

We’re always working to improve our offering and bring the most competitive quotes to our customers – we’re also fascinated to learn of all of these amazing people and professions that keep the wheels of industry turning!”

*Data extracted from quotes processed between January and December 2018.