UK licence plates and how they work

Alert: We’re just as confused about Brexit as you are! So beware, some of the information on this page may no longer apply post-Brexit. For the most up to date information, please visit GOV.UK

The UK vehicle licence plate system has been in use since 2001 when it replaced the outdated Prefix style system after almost 20 years in business.

Before Prefix plates came Suffix plates and before that we had classic Dateless plates.

They were all replaced as the number of vans and vehicles on UK roads grew and they reached the end of their usable life.

Now we have a system which has been designed to last a lot longer than its predecessor however it too has a shelf life. But while we’ve got it, we thought we’d explain a little bit more about it and what it can tell you about a van.

The current UK licence plate has seven characters in total with all bar the last three used to indicate something about your van.

The first two characters in a standard number plate are letters and they indicate where your van was first registered.

The numbers in your licence plate indicate the year that your vehicle was first registered.

The current licence plate system updates on 1 March and 1 September every year, kicking off in 2001 with 51 in September and 02 in March 2002. 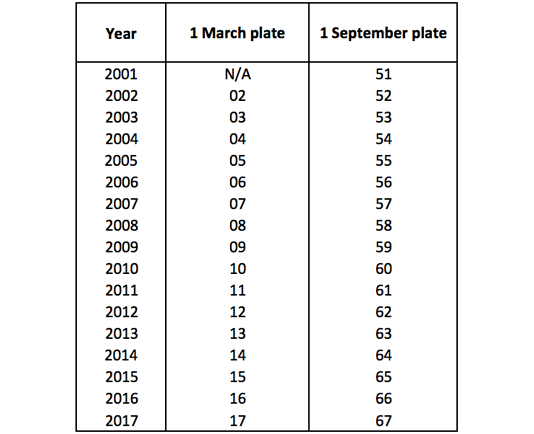 The last three letters of standard UK licence plates are random and don’t mean anything. If you get your van’s registration to match your initials that’s more luck than anything else – unless of course you buy your own personalised number plate.

What about older vans with older plates?

There are lots of older vans that still have prefix and suffix plates in the UK, there just harder to spot.

When it comes to a prefix licence plate, the only information is the age of your vehicle, and that’s indicated by the first letter.

It makes sense to start at the beginning so the first year of prefix licence plates (1983) used the letter A. So a licence plate that began with an A was registered in 1983, B in 1084 and so on.

Suffix style licence plates did things the other way round, with the letter at the end of the registration number indicating your van’s age. This system was in place between 1963 and 1983.

What information can you look up with a van’s registration number?

As well as being able to identify the age and location a van was registered, a registration plate also allows you to look up different facts about a vehicle.

Are vans with new licence plates more expensive to insure?

We analysed average van insurance quotes in July, paying particular attention to the date of first registration and splitting by number plate, starting in March 2013 and running through to September 2017.

While the average van insurance premium was most expensive for vans with a 66 plate, they didn’t get cheaper the older the van was, in fact 16 plate vans had the third cheapest average insurance premium.

So is there a relationship between your van’s registration plate and the price of your insurance? Nope. There are much more important factors at play, like your postcode and driving experience for example, which will have a much greater impact on your van insurance.