Oldham is most expensive city for van insurance

According to our latest data1, van drivers in Oldham are paying the highest premiums for comprehensive insurance in the UK.

The data shows a mixed picture of premiums, with a clear northern ‘divide’. Alongside Oldham, three other cities in the North West of England feature in the top 10 most expensive locations for van insurance, compared to none in the North East.

Jade Isabelle, commercial director at The Van Insurer, says: “Most people will appreciate that van drivers in rural areas are likely to pay less for their insurance premiums compared with drivers in cities, but it may come as a surprise to those in the North West to have higher premiums versus their neighbours in the North East.”

Van drivers in Luton and Slough are paying the second and third most expensive premiums, higher than central London.

At the other end of the scale, van drivers in Scotland were likely to enjoy the lowest regional average, and Staffordshire town Newcastle-under-Lyme had the cheapest premiums in the whole of the UK, with van drivers paying on average £567 per year.

Similarly, Redditch, Lincoln and Mansfield, all in the Midlands region, came within the 10 cheapest cities to get van insurance.

Big cities not in top three

London was only the sixth most expensive place for van drivers to get insured, with the average comprehensive policy costing around £1,468 per year. Birmingham, the UK’s second biggest city, came lower down the rankings, placing eighth at approximately £1,458 per year.

Likewise, Manchester-based van drivers saved an average £219 in 2018 compared with the previous year with average policies dropping from £1,704 to £1,485 respectively.

Jade explains: “There are many different factors that can affect how much van drivers pay for their policies, from accident and theft rates in the area to the age and specification of the van.

“Whatever the premium, van drivers want to know they are getting the best possible deal for the insurance cover they need and comparing prices through the Van Insurer makes that job easy.” 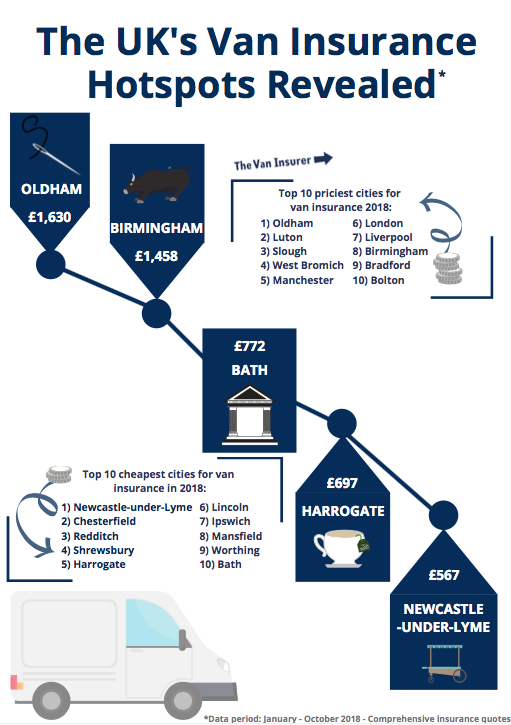 Top 10 most expensive cities for van insurance in 2018

Don’t forget, The Van Insurer compares quotes from up to 50 different brokers and insurers. If you’re one of the unlucky people whose town sits on the first list, why not get a quote through us and see how you compare to the rest of your area? It only takes five minutes!

When is the cheapest time to buy van insurance?