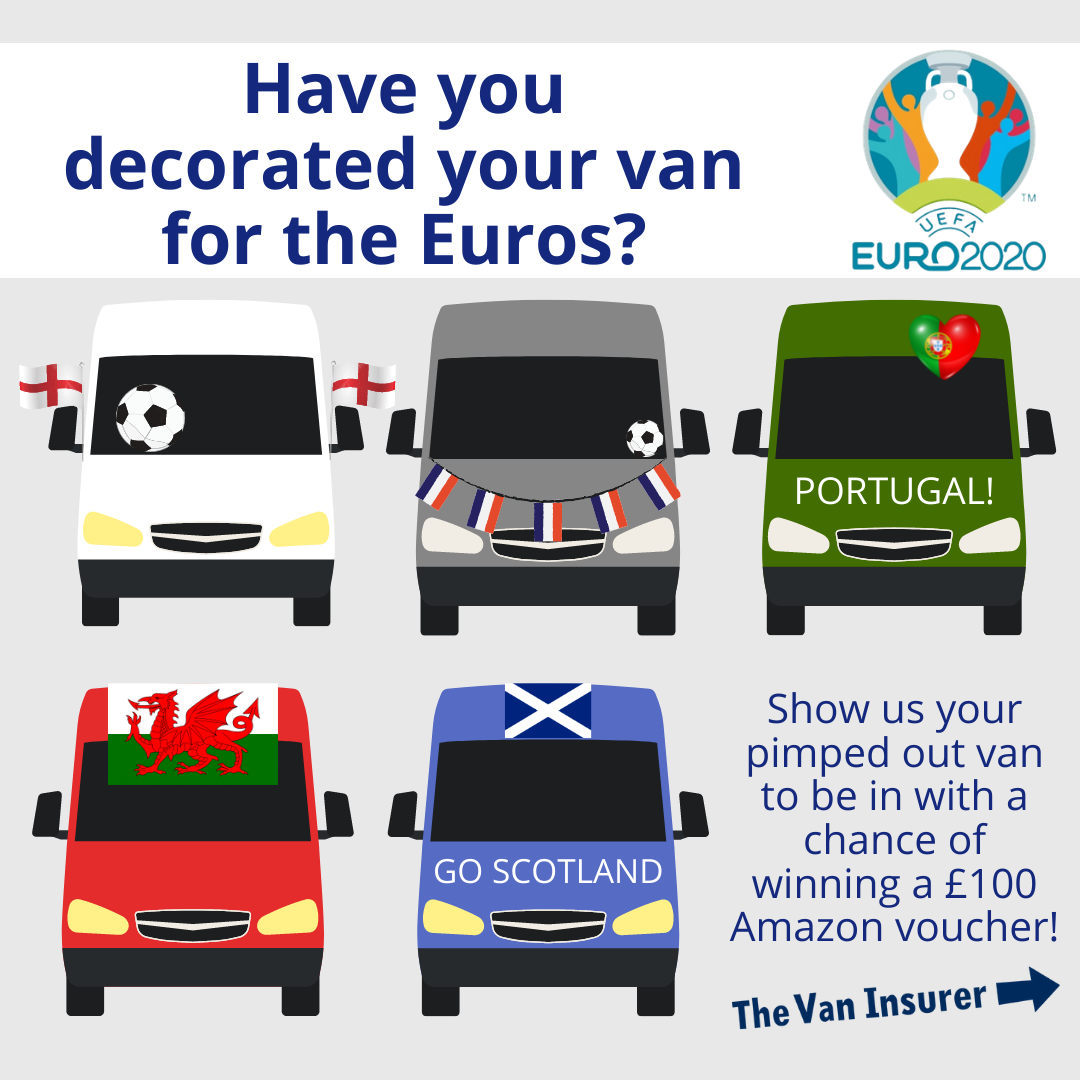 Football’s coming home! Well, that’s the plan but if you’re not convinced that your team will be taking home the trophy for Euro 2020, there’s still a chance to SCORE a win with The Van Insurer! We’re on the lookout for the tournament’s ‘Super Fan Van’, who could be in with the chance of WINNING an Amazon voucher worth £100 to splash out on some celebratory treats this summer.

The prize draw entry period will run from Friday, 18th June until Sunday 11th July – if you want to be in with a chance of winning, there are THREE ways to enter.

Instagram: Upload your Euro 2020 van image and tag in @thevaninsurer

*Be sure to comment on the ORIGINAL post on The Van Insurers social media pages and NOT a shared post.
The winners will be drawn at random on Monday 12th July 2021

The Prize
£100 Amazon voucher
Full terms and conditions are outlined below. Good Luck!

Ts&Cs
This prize draw is open to residents of the United Kingdom who are aged 16 years and over. Proof of identity and age will be required before the prize is awarded.
Employees or agents of the promoter or their immediate families, or anyone else professionally connected with the promotion, are not permitted to enter the prize draw.
Entry to this prize draw will be from posting using the relevant hashtag, commenting on or replying to the relevant social post(s) and by no other means.
No purchase is necessary to take part in the promotion. Participants who have used our services or purchased insurance through The Van Insurer or ‘followers’ will not be favoured within the prize draw.
Multiple entries from the same individual are permitted. However, only one entry may be submitted per-day, per-individual. If an individual is found to be completing multiple entries on the same day or through multiple or fake accounts on the same social channel the individual will become ineligible for the entire prize draw.
All entries must be received before 11:59pm on Sunday, 11th July 2021. Entries submitted after this closing time and date will not be included.
No responsibility can be accepted for entries not received for whatever reason.
Prize will be as described in promotional material and are non-transferable. There is no cash or other prize alternative. Entry into the prize draw is deemed to be a full and unconditional acceptance by the entrant of the terms and conditions of this prize draw. A failure to adhere to these terms and conditions may result in disqualification from the prize draw and, if applicable, forfeiture of the prize. The Promoter reserves the right to alert Facebook, Instagram or Twitter to any such behaviour, which may result in the person’s account being frozen pending investigation.
This promotion is not sponsored, endorsed or administered by, or associated with Facebook, Instagram or Twitter and the promoters release Facebook, Instagram and Twitter of any and all liability in relation to this promotion. Entrants are providing their information to the promoter and not to Facebook, Instagram or Twitter.
Winners will be drawn at random using a computer-generated method from those entrants who have correctly submitted their entry. The results are based on the law of chance.
The draw will take place on Monday 12th July 2021. The Van Insurer will attempt to contact the winner within 24 hours of the draw taking place through the social media account used by the participant to enter the prize draw.
The promoter reserves the right to withdraw or amend this prize draw or the terms and conditions without notice and at their absolute discretion in the event of any unforeseen circumstances outside their reasonable control. Any changes to the prize draw will be notified to entrants as soon as possible. Such withdrawal or amendment shall take effect upon its being published on Facebook, Instagram or Twitter along with informing the relevant participant directly in the case of withdrawal.
The promoter and its agents accept no responsibility for difficulties experienced or loss or damage incurred in submitting an entry for this prize draw.
Decisions of the promoter and its agents regarding this prize draw or the terms and conditions are final, and no correspondence will be entered into.
The promoter reserves the right to draw an alternative winner in the event that the promoter or its agents believe that any drawn entrant has contravened any of these terms and conditions.
The promoter reserves the right to draw an alternative winner in the event that no reply is received from a winner within a 24-hour period of communicating the result.
The promoter or its agents are not liable for any loss, damage or injury that might occur to the winner resulting from their acceptance of the promotion or prize.
Only one entry per-day, per-person will be accepted. No applications from agents, third parties, organised groups or applications automatically generated by computers will be accepted.
The promoter reserves the right to seek and issue publicity on behalf of the entrants. By entering the promotion, the entrants agree to participate in publicity such as social posts after the event on the promoters social channels as reasonably requested surrounding the promotion.